It’s 4.30am on a cold April morning and I’m walking through Bubbenhall Wood listening to a symphony of clicks, churrs, chyaks and intense trills.

I head slowly along a gravel path, stopping constantly trying to hone in on the birds that are waking up and bursting into song. The first bird to break the silence is the blackbird. His eyes are mostly larger than the other birds and therefore gather more light in so it is first off defending its territory and feeding on insects. It is putting on a superb performance.

Then I instantly recognise a wren nearby, with its steady rattling stream of high pitched thrills and repeated notes, like a trigger happy gun firing away all these notes. A robin soon comes in, its bittersweet melodic warble, then a song thrush with its ‘tid it tid it tid it’ loud repetitive sound, unlike the wren and robin which have a repertoire of different notes.

The chorus begins to build by the viewpoint overlooking the quarry as more birds start to join in with the collective orchestra. Many great tits start sounding their familiar song containing two repeating notes, one high and one low “tea-cher, tea-tea-cher”. However, there could have been more in the vicinity; they have over 70 different calls and songs and are known to mimic other bird species. Their musical repertoire is so vast that if you hear a bird song you don’t recognise there is a good chance it’s a great tit! Blue tits are starting to transmit their songs and calls as well. One particularly familiar sound is a sharp insect like noise which can be the courting display of a female, where she will be energetically flapping her wings. 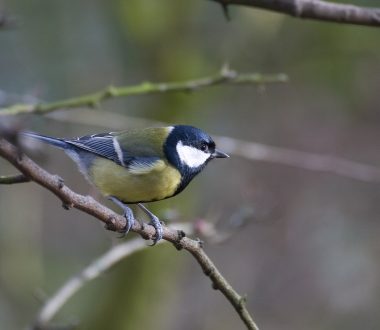 My bird soundtrack has now been on for 25 minutes and the dawn chorus is in full swing, hundreds of birds singing away but I can hardly see any of them. One bird I’m starting to hear a lot of is the chiffchaff, an easy bird to recognise as it says its name. It’s remarkable to think these tiny migratory birds have been arriving over the past month from Spain and Portugal to breed here.

I’m now entering the territories of various corvids, starting off with the jackdaws with their high-pitched metallic sounding ‘kyow’ and ‘chyaks’, the loud throaty rattle of the carrion crows along with the raven’s deep croaking carrying throughout the woodland. The corvid concoction of calls overwhelms my ear drums as they collectively dominate the soundscape. I carry on reaching an open clearing where I am able to appreciate the environment around me; the sun is beginning to illuminate the sky allowing me to see the woodland flora. I can see a carpet of bluebells and wood anemone along with a male pheasant marching through them. As soon as it realises I’m here, it projects its loud cough like alarm call whilst flapping like mad to escape me.

Moving further through the wood, I am able to identify more birds, including the occasional rattle of magpies, a distant blackcap with its fast and varied fluty song and lots of background woodpigeons ‘choouing’ away.

The dawn chorus has been going on for about 45 minutes and there’s a noticeable change in what you can hear, almost as if a volume button has been turned down. Some of the birds which I expect to hear but haven’t heard yet are the finches. The chaffinches and goldfinches in this woodland are having a lie in as their diet consists of predominantly seeds and nuts so they don’t have to be chasing prey like the blackbirds and robins. As I venture back to the car park I start to hear the chirping chaffinches with their soft ‘chiffs’ whilst in flight and the honking Canada geese over on the lakes nearby.

The volume button has been turned down further on the dawn chorus, a more ambient background bird song, which is when I start to pack away. However, on my slow drive down the country lane, I am hoping for more to hear down to the main road and I am in luck! There’s the distinctive drumming of the great-spotted woodpecker and the very familiar call of a distant male cuckoo. What a great way to end the visit.

Right now, it’s hard to think of a better way to spend a day. The fact that it was just me and the birds in the wood, felt a very intimate and overwhelmingly special moment. Getting close to nature like this is a perfect antidote to the pressures of modern life, especially listening to birdsong which helps improve our mental and emotional health, happiness and wellbeing.

Enjoy your own dawn chorus from your home on International Dawn Chorus Day (3rd May) where people around the world will all be experiencing an unbroken wave of sound circling the world as day breaks.

Below is a short dawn chorus soundscape taken that morning.